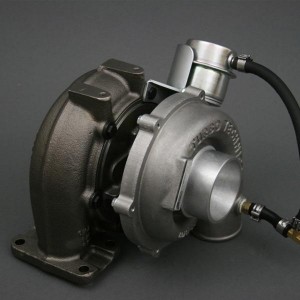 Standard, fixed geometry turbo design is always a compromise. Engines need a small turbo for fast spool-up and improved throttle response (reduced turbo-lag) but the small compressor size does not allow enough flow for anything beyond mid-range revs. So a larger turbo is required for mid-range and higher revs and increased flow, but this leads to increased lag at the low end.

The VNT or VVT – Variable Vane Turbocharger acts like a small turbo initially then alters geometry to increase flow in higher revs, giving an improved spread of power across the rev range. Our VVT units use a special actuator operated by boost pressure to control the vane angle. Our VNT is designed to be a direct replacement for the original requiring no mods to the car.

Power is improved throughout the rev range but particularly in the lower and mid-range revs. Turbo lag is reduced, and compliments any other tuning such as the uprated intercooler.